We have two floors in the museum. On the ground floor we have the new display of Classic motorcycles, which is housed in the infamous ‘Black Hole’ where the convicts were held for crimes such as drunk and disorderly, prostitution, livestock theft and murder, as well as those awaiting transportation to the Colonies. During the Potato Riots of 1820 it is said that six women and one man were held in the cell and that when they were released the man appeared to be inexplicably exhausted!

Fishing
We have extensive documentation related to the fishing industry, including rare lists of Peel boats and their crew, catches etc. Many old photographs, models and artefacts of an industry sadly in decline.

Boat Building
Similarly, photographs, documents and tools belonging to workers in the Boat Yards of  Peel, such as Neakle, Watterson and Cashin, and Graves are on display.

The World Wars
During WWI a huge P.O.W. camp was built at Knockaloe Mooar at Patrick one mile south of Peel to house 5,000 German and Turkish prisoners, as well as 3,000 guards and civilian workers. Eventually the camp was expanded and 23,000 were held behind the wire fence.

In WW2, Peveril Camp in Peel held detainees such as Dutch and German refugees, Italian fascists and members of the IRA. A few of these internees tried to escape, and we have written documents from some of the escapees on archive in the museum. We have memorabilia from both these camps including items made by the internees (top right) as well as ration books etc.

Law and Order
We have the last birching stool to be used in Peel in the 1880s, as well as various other items pertaining to the Manx justice system.

Research Centre
In our small Research Centre we have up to date technology to facilitate archival research and (with permission) to copy photos and documents.

Themed walks exploring the varied history of Peel’s industry, natural history and architecture in the company of noted local historians can be booked for groups by prior arrangement.

Informal talks and discussions on any aspect of Peel history can also be pre-booked for groups by contacting the Leece Museum or Peel Town Hall.

Back in 2000 the museum was relocated to its new premises in the Old Courthouse building, which served as the town’s seat of justice until the beginning of the 20th Century. It retained many original features, including the atmospheric ‘Black Hole’ prison cell (left) in which the town’s wrongdoers were incarcerated. The Black hole has now been transformed into a permanent display of classic motorbikes. 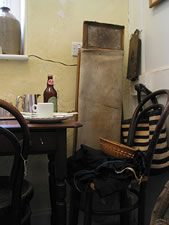 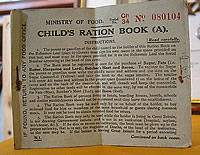 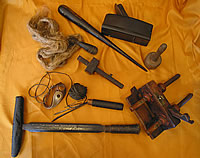 Welcome to the new Peel.Online

We hope you find things are quite familiar from the old site, and now much easier to use on your phone and tablet. Please let us know of any problems.